Numana: the lady of the riviera Numana is a shelter where to relax and have fun, in a dream-alike environment.
Blue Flag 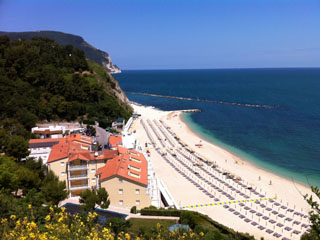 Between nature and landscapes
Numana is in the heart of the Cònero Mountain Park. The inhabits divides it into two sections: Numana Alta (upper) the oldest part of the town lies on the hill, and Numana Bassa (lower), the more recent part of it, which includes the port and the cost until the ward of Marcelli.

The beach is gravel to the north of the port and is sand, wide and more easily accessible in the south of it. From the green gardens it's possible to have a stunning view of the landscape, as much as from the other view-point, the balcony of the tower. Pocket handerchief fields and Mediterranean underwoods spread beside the coast. The Conero mountain frames this suggestive landscape. 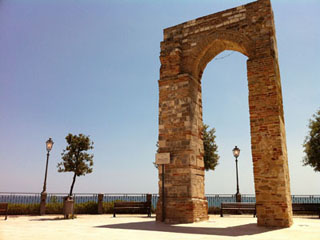 Ancient port of Piceni tribe (remains of this period are preserved in the Antiquarium), Numana was included in the Athens routes from the Vth century, becoming a famous market and a trade center to sort Greek goods out, towards the inland and the middle Adriatic sea. Roman colony and then "Municipium", fall down in the Middle Age because of earthquakes and sacks. In the 15th century was under Ancona Bishop Government. In the last ages, from humble fishermen village is got a modern vacation centre, preserving a good balance with the historical part. Numana is also one of the most equipped port for sailing and boating. Town's symbols are the Tower, a monument which origins are unknown still today, and the Costarella, a popular alley getting in summer a natural setting for pictorial exposition. Mention must go also to the Sanctuary of the Crucifix, preserving a legendary wooden crucifix.